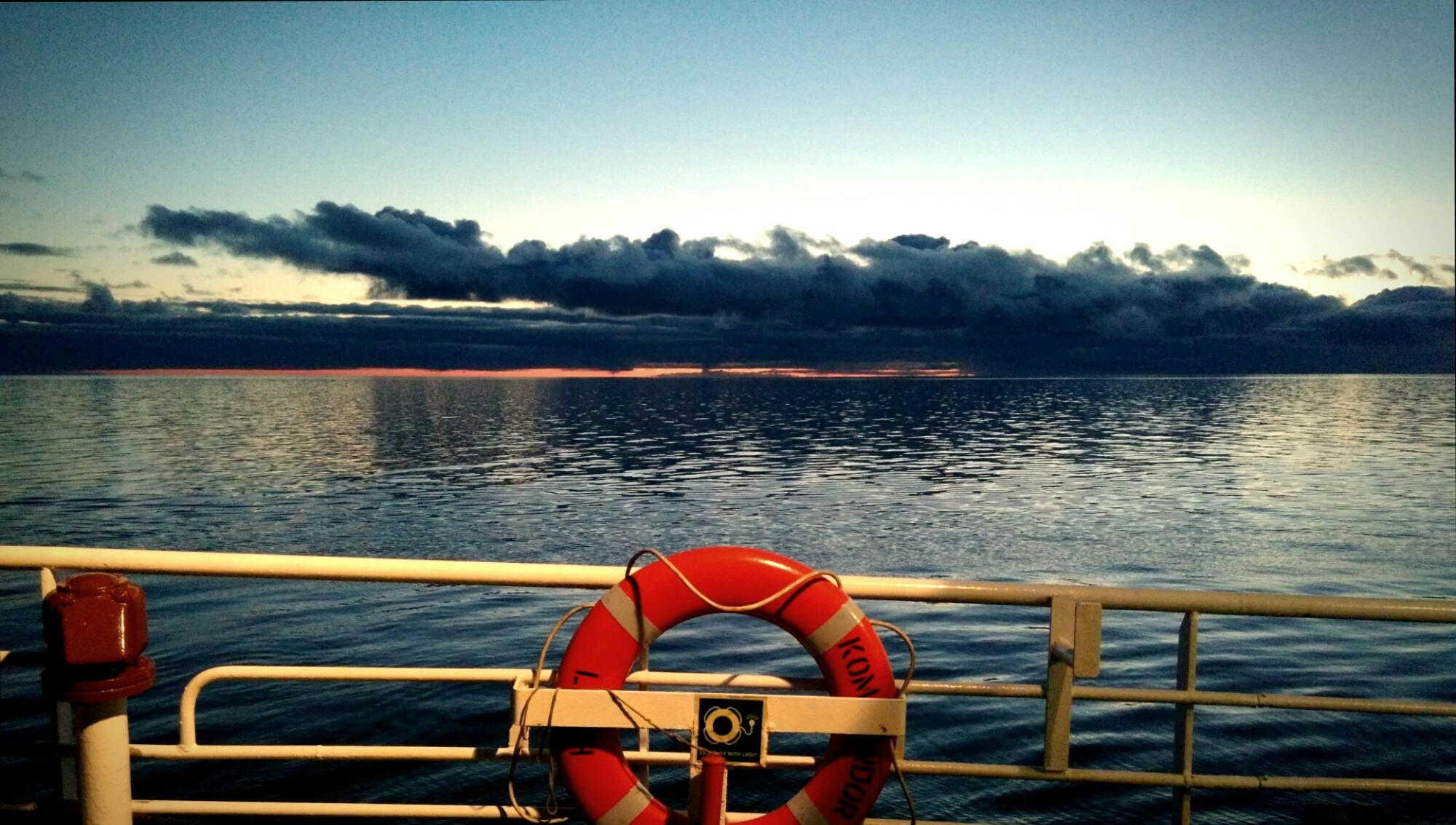 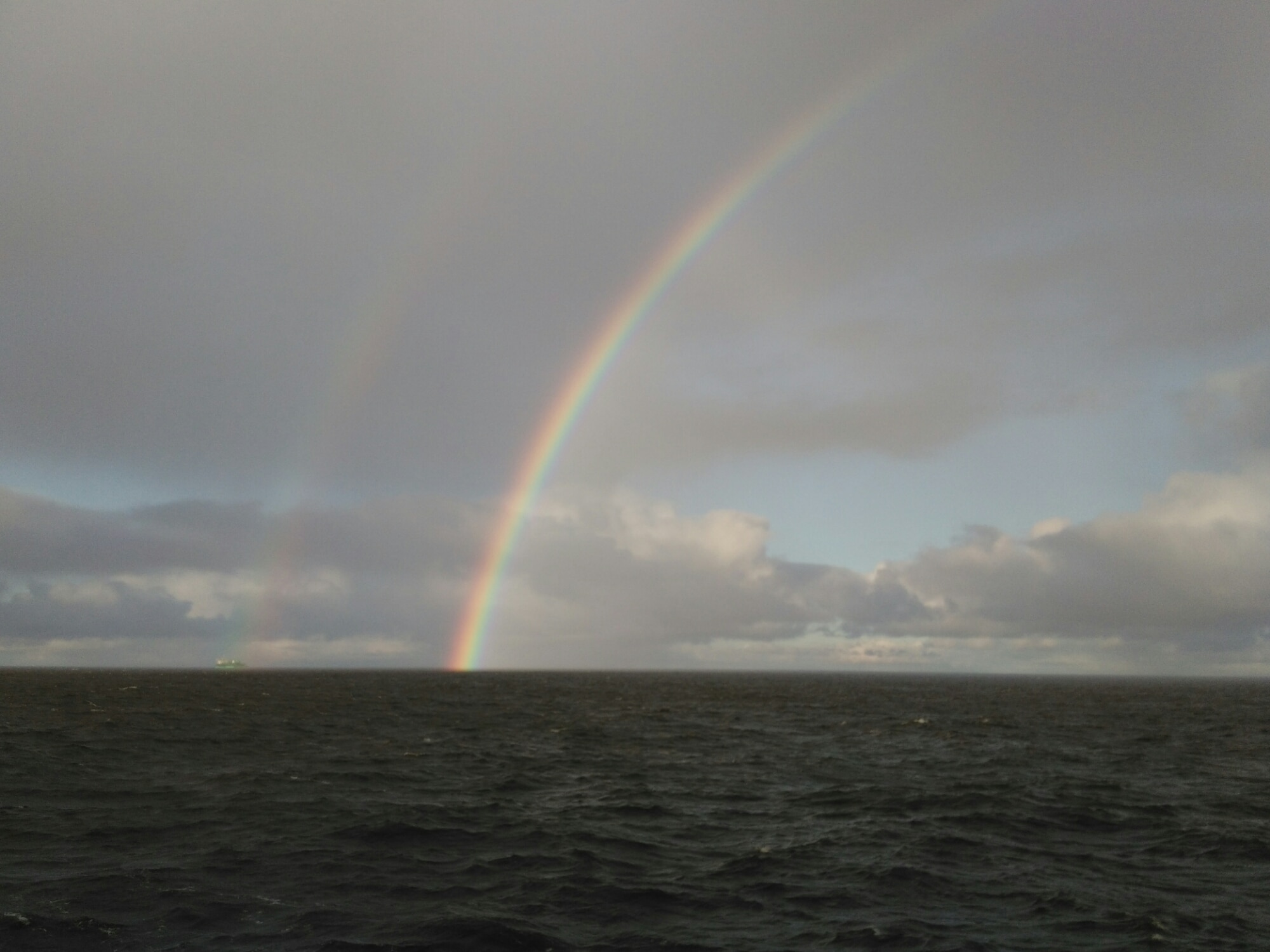 ETA 16 days. I have found freedom. Standing on the backend of a vessel cruising down the river, I found it. My clothes flapping in the wind, my wang out of my pants. Watching my wee disappear into the violent jets behind us. A sea that goes on forever and a blue sky that covers all of my view. Impressive ships, small on the horizon, too far to hear them purr. The cleanest air I’ll ever breathe. Inside the vessel there’s Russian pop playing, which takes me back to a time I was working in this country seven years ago, learning how to drink on complementary Jaegerbombs at some obscure Russian club. There’s cake here too. And more of that delicious soup. The next few months are looking good. Somewhere from the US I got word one of my good friends has entered the world of digital nomadism, and so I’ll be going back to one of my favorite places, dragging him up with me. The universe delivers, once again.

ETA 12 days. Weather stand-by. We sought shelter near the coast of this Siberian desert. Somewhere out in the open there’s waves several notches higher than the ones that made all of us want to curl up and go unconscious for a while yesterday. It’s a typical scenario. I would sit there, barely motivated, firm in one of those high-end ergonomic chairs designed to keep you productive for 12 hours straight. My timeplot showing just how much we’re rolling with unbiased accuracy. 13.4 degrees left. 15.2 right. I see all manner of small things, pens, papers, sweets flying off the table, thinking “I’ll just pick that up when it calms down”. You have to communicate that. We’re guests in the skipper’s home here. Shoes off and don’t make a mess. Don’t ask for food, wait until they offer. In the meantime a partner in crime in the back mustering up the courage to officially call it a day and flee to safety. And all of this while these badmouthing Dutch seamen are standing around perpetually powerposing, laughing at the nerds who think they can handle a job on the water. One of them texting in the back, like he’s not even noticing what’s going on. That was yesterday, and compared to that, sitting in our floating office, lemon & ginger tea in hand, safe and sound, this is pretty peaceful. Some of the guys have set up Unreal Tournament to wait it out, and are now unavailable for small talk. I’ll go to check if the sauna is on. Maybe pass by the messroom. All that cake the cooks are making every day won’t eat itself.

ETA 8 days. In a near vegetated state I’m lying on my bed. Cup of tea by my side, listening to a long rant on Bill Burr’s podcast. He’s responding to a mom, who normally loves his material, who now took offense to him not taking moms as seriously as Oprah does. I’m practicing forming opinions in my head. Dumb cunt. If the only situation you can sympathise with is your own, you shouldn’t expect anyone else to understand you. I’m still wearing my swimshorts from the sauna.

Suddenly a bang in the door, “Northern lights!”. Fuck! Lights on, sound off, pants on. Before I know it, I’m standing outside on the bow, where the deck lights can’t reach. My bare feet in my sandals, here in Siberia in a nice sub-zero atmosphere. Can’t go get socks now, what if I miss anything. If two hours from now, my black frostbitten toes need to be amputated, it’ll be worth the bragging rights I get in return. Professional cameras get pulled out, shutter speed settings get fondled with. Others pull out their cellphone, not realizing they’d better just enjoy it as it is, because they won’t win the photo contest anyway.

If you would stand with your back to the Aurora, looking at us, you’d think we were a college performance art project demonstrating a collection of orgasm sounds. “ Wooooaaa! Aaaaahhh!”, goes the crowd. One guy remarks that a Beluga whale jumping out of the water at this very moment to make a flip would make the experience truly orgasmic. I remark he might be a bit demanding. This is more than awesome on its own. We seem to be spot under the cone, and we have no idea where to look first. Some of us just follow the vocal cues of colleagues as they discover a yet brighter green curtain in the night sky. Watching the flares drape over the heavens, it’s one of those moments where I experience in real time that we’re just standing on a ball in suspension. I want to put the sky on pause, but I must be grateful, taking all that I can get. This is what we all came for.

As it gets dimmer and dimmer, we decide to call it a night. I take my undercooled feet and face back inside, we all make ourselves hot chocolate or tea and reminisce about what we saw. Stories get thrown around about previous encounters, all these troopers who have worked everywhere all the way up to the North Pole. Photos and applied settings get compared to pick up a few pointers to take along for the next time. It’s a nice old-school chat around the fireplace kind of moment. And who knows, maybe tomorrow we can go for seconds. 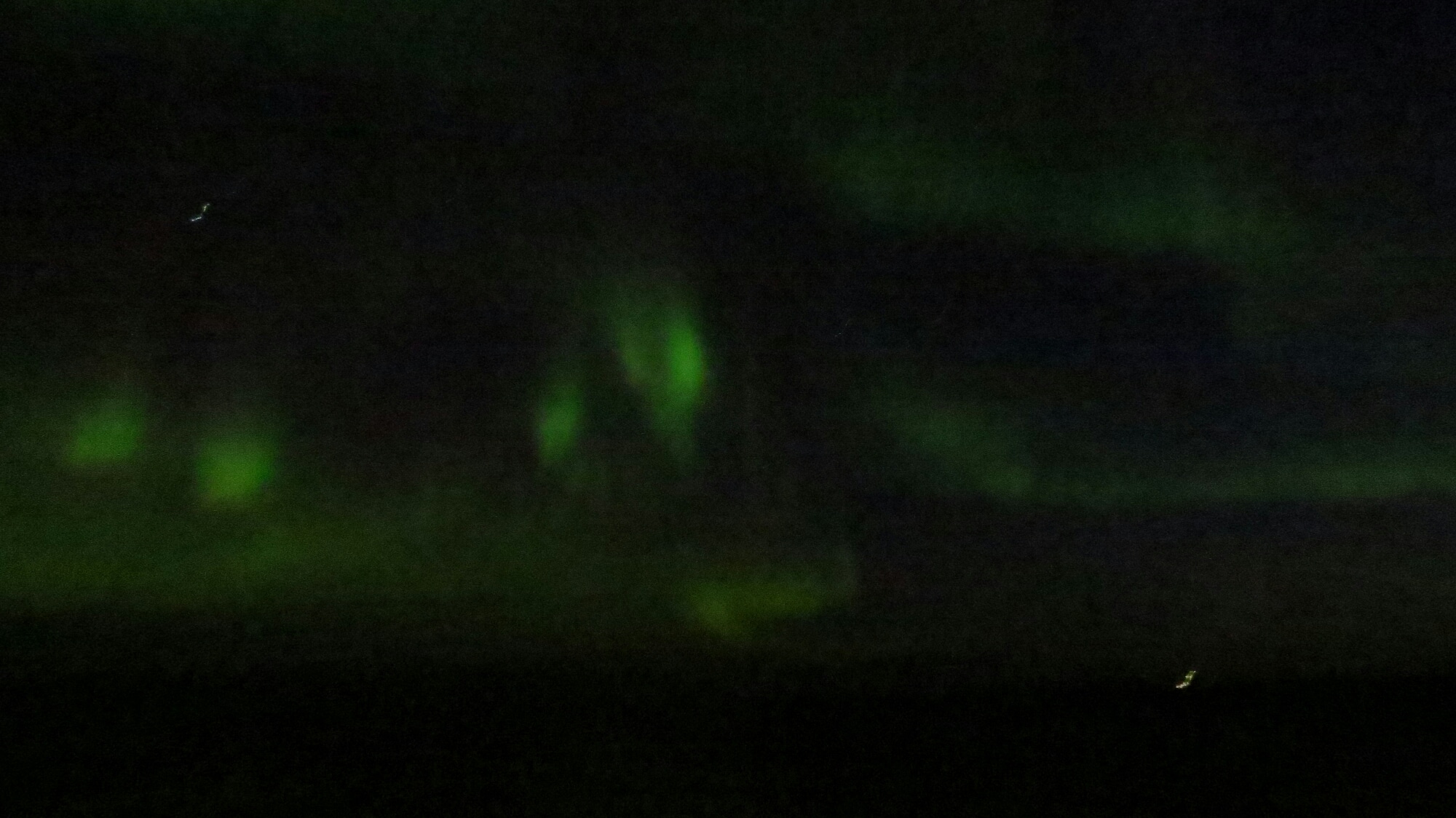 ETA 6 days. I have boarded a ship that was scheduled to go to port, which is another step closer to the airport with a daily connection to delicious freedom. They gave me the hospital bed, and I can’t seem to turn off the cold air conditioning. I’m texting like an insecure teenage girl, arranging money transfers, apartments, hang outs and beer dates. This is going down. To be continued…

ETA 5 days. Like a child learning how to swim, I have dipped my toes again in the world of alcohol last night. A slow start, but a start nonetheless. The Russians actually seem to know what they’re doing, when it comes to brewing beer. And don’t worry, the vodka is still in my future. When in Rome… No hangover yet, but hey, it’s Friday. Be reasonable. Some people have to work today.

Except ME! That is correct, yours truly has successfully made the transition from his lazy isolated job back to lazy reality. The smell of delicious unabridged freedom. And the first wisps of that smell, for me, start on the streets of Moscow.

A couple of months ago a few of us boathermits were talking about Russian mentality, and someone mentioned how airlines will fill up the gastank of the airplane with just enough fuel to make it through one complete trip, so that they would literally be flying on fumes as they approached the landing strip. This was of course a very comforting thought as we were circling above Moscow and the pilot quietly informed us it would take another 15 minutes before the airport would give us clearance to land. Luckily the theory was debunked in my case and I live unmaimed to tell the tale.

Step number one, above all else, now that I’m back in the populated world, is to upgrade my mobile guitar rig. The thing with playing guitar or doing anything is, the more hassle it is to get going, the less you’ll do it. And I really want this whole thing to be as easy as flipping a switch and going ahead with the rocking out. Plus, I got tired of hearing “Why don’t you play us a song!” for a full month on the boat and having to explain every time that I couldn’t turn up my earbuds loud enough for them to hear without them catching fire.

So this morning I stepped through the door of a distributor for B&W sound systems. Since I’m already accutely aware of the low probability of being greeted by someone with a flawless American English accent, I come prepared with info and pictures on my phone. There was an extra barrier when I came in, because it wasn’t a store, as much as a fancy place where you would go with several credit cards to discuss and order your highly calibrated home media center. In other words, there wasn’t any reception. But, after banging on a few doors, and scaring a local with my non-existent Russian, I got to test and buy a nice set of mobile speakers. They sound surprisingly nice with my effects pedal jacked straight into them. When one lives a mobile lifestyle, one needs to be original annoying neighbours across the globe in a mobile way. Let the jamming begin. 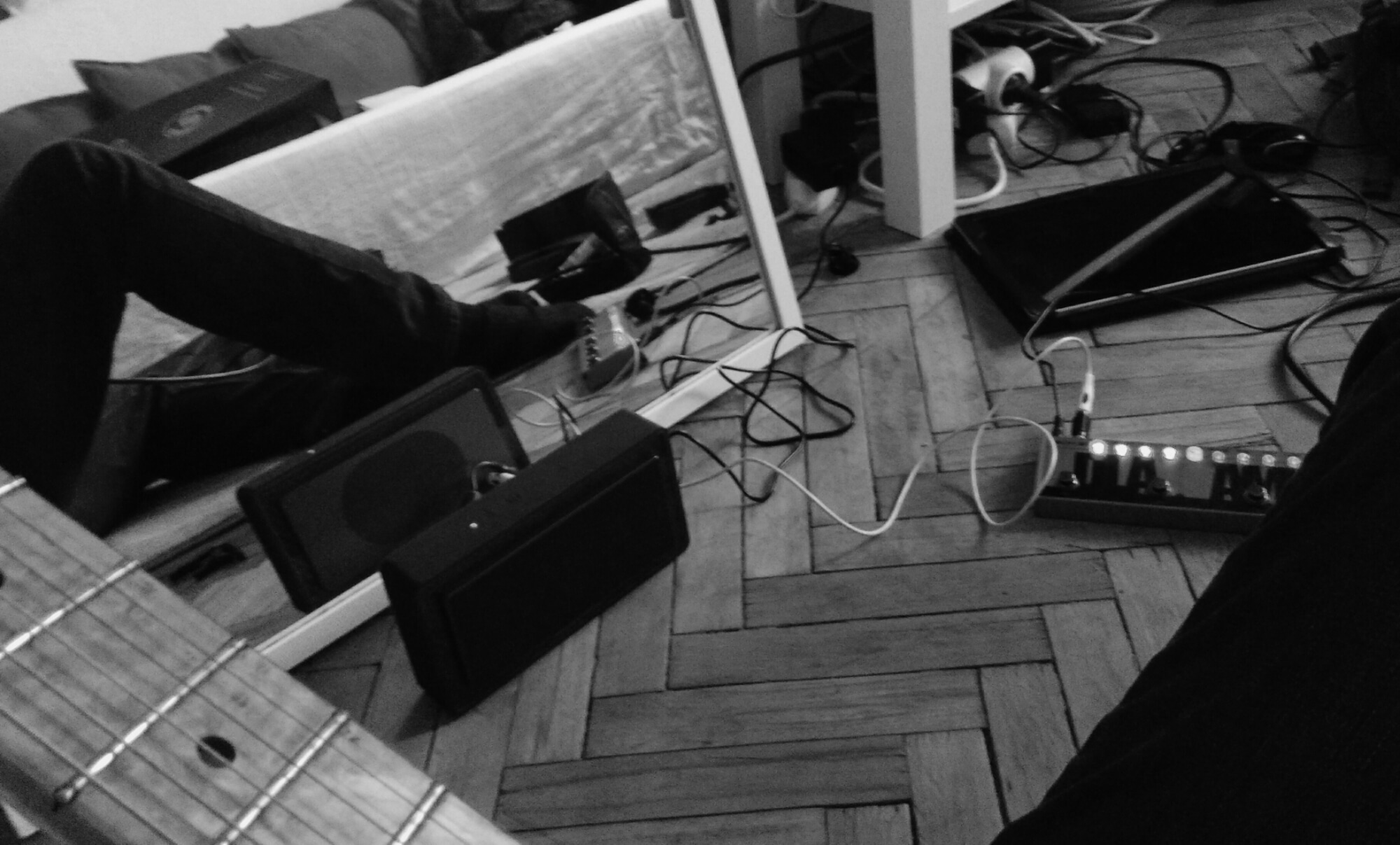 ETA 4 days. I’m walking around in the center, somewhere near the Red Square. It reminds me of when I was here about 5 years ago. I had a 24 hour delayed flight, and decided to go to the center from the airport hotel in the least efficient manner possible. I had basically tried to take a bus, got dropped off at an unknown location, took a metro to an unknown stop, and eventually approached a taxi in an unknown language to get me through the last stretch. It wasn’t too long after my Interrail trip through Europe where I coincidentally learned about the complete history of World War II. Someone had taught me then that during the Iron Curtain days, the Americans would have to smuggle artists into Russia to make renders of the Kremlin, because walking in with a camera was not done. And there I was standing, with my camera, drinking my Russian Pepsi, enjoying a bit of freedom my parents even never had when they were 25.

As a specimen of the human race, transplanted from one cultural region to another in what seems like an instant, I’m wandering and noticing the subtle differences. Advertisements give hints of the local beauty ideals, sad accordions provide the sound track for my walk. But even more than that, every time, what takes me aback is how similar everything is. It’s taken for granted. I step out of a plane in any location, and I understand what the traffic lights mean, how to purchase chewing gum, that wearing pants doesn’t phase anybody. Money, streets, basic human dignity, the fiction that we believe on a global scale. It’s all so easy. As long as we stay on the marked path. 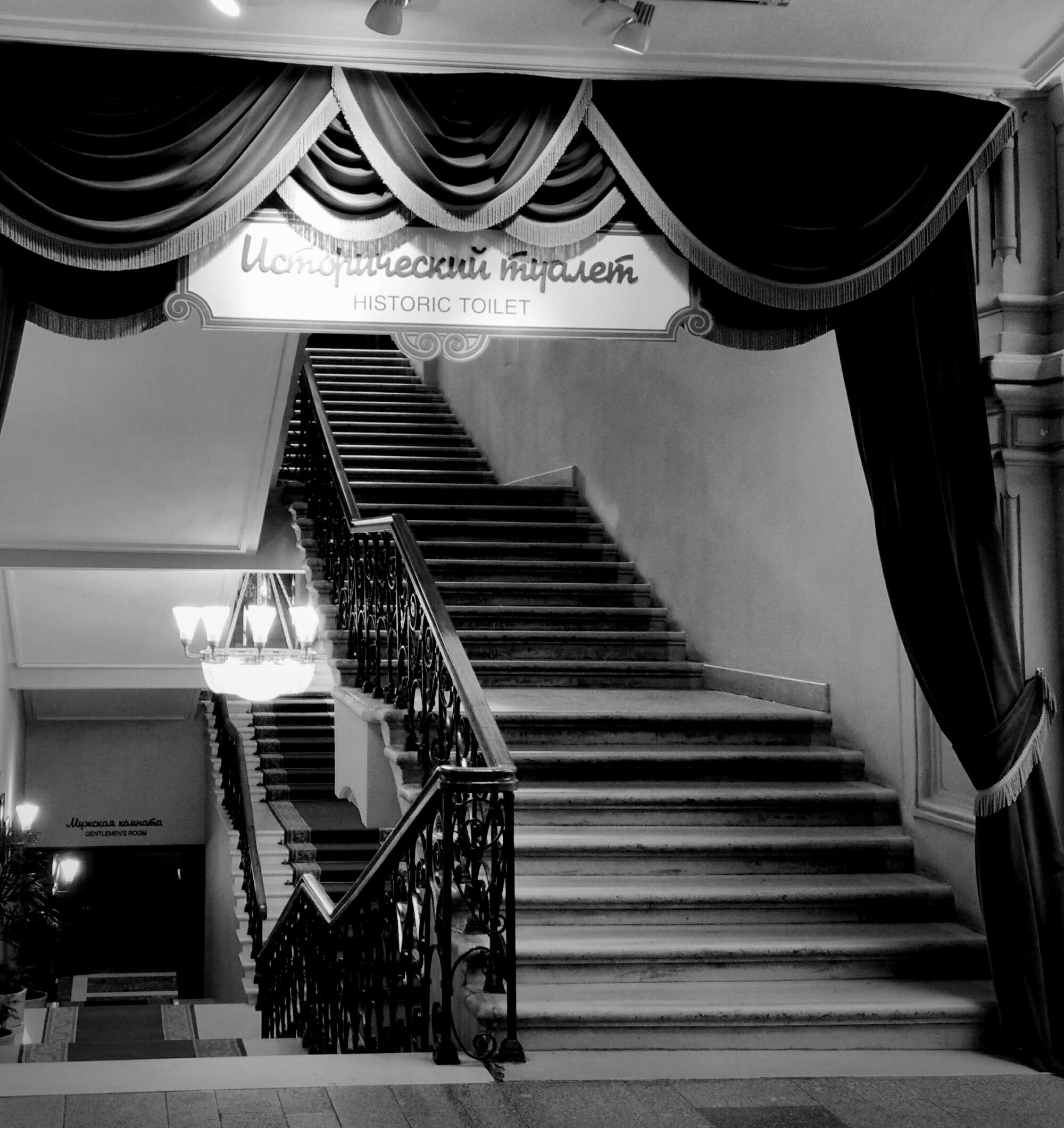 ETA 1 day. With every step, the weather improves. I’m lying down in Plaza España with my ever more lazy ass, chatting with my Couchsurfing host about life and what’s to come. The same damn worries we all share, how to do this life thing correctly. How to win the game. But let’s just lie down and enjoy the breeze for a while, cause we all get the same boobyprize in the end anyway.

I mailed some stuff home this morning. Every little thing counts when you’re carrying it on your back all the time, and the final stretch of my trip will take me a long way out of reach for another while. The ten hour journey that will take me back to Medellin, where I left a piece of me last time. I drew the straightest line there from Siberia on a map, and that has been the journey of these last few days. If all goes to plan, I’ll welcome my Gringo friend at the airport shortly after I arrive, and my Finnish friend will welcome us home. Word has it there’s already beers in the fridge. I’m happy. 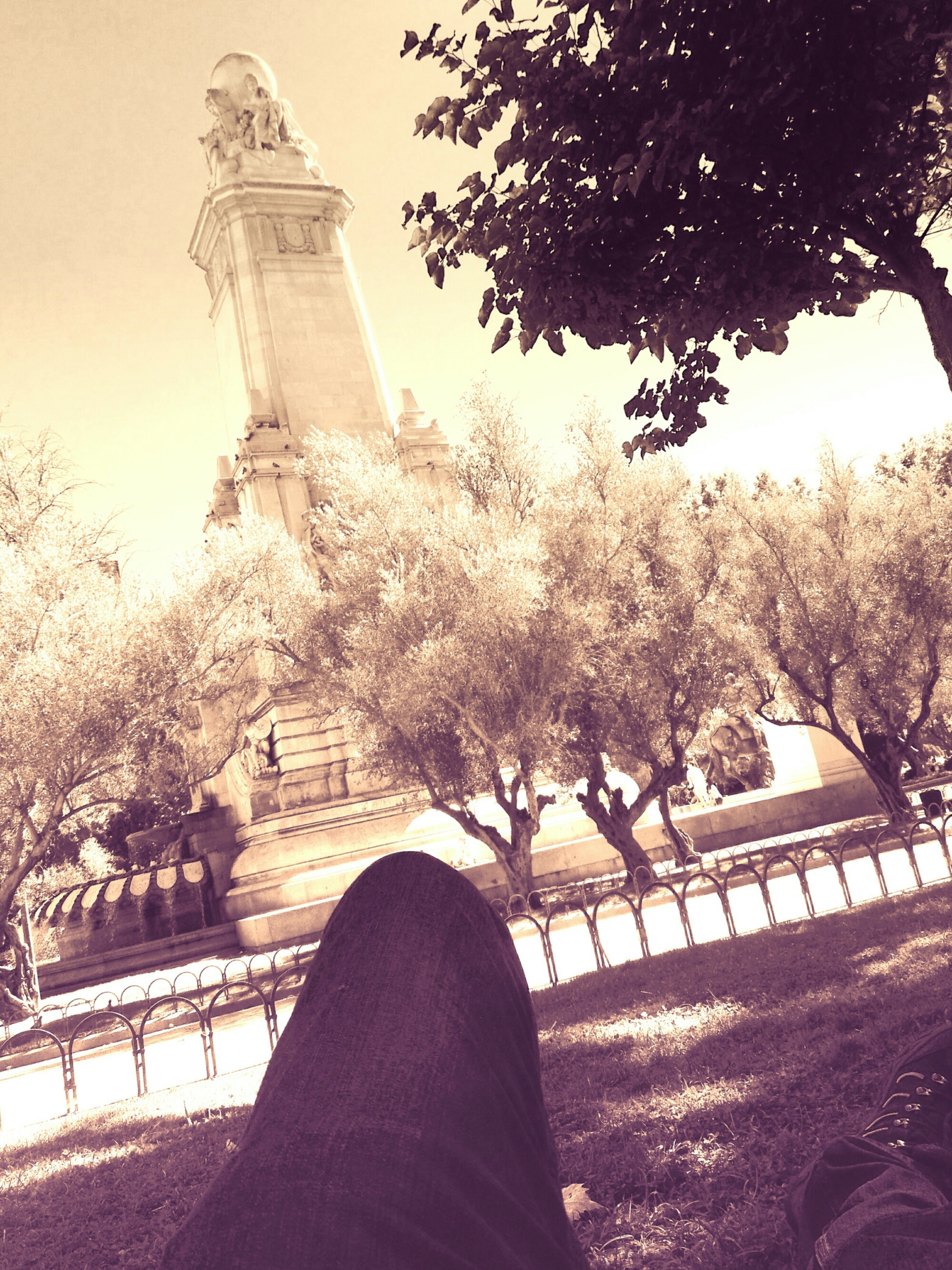