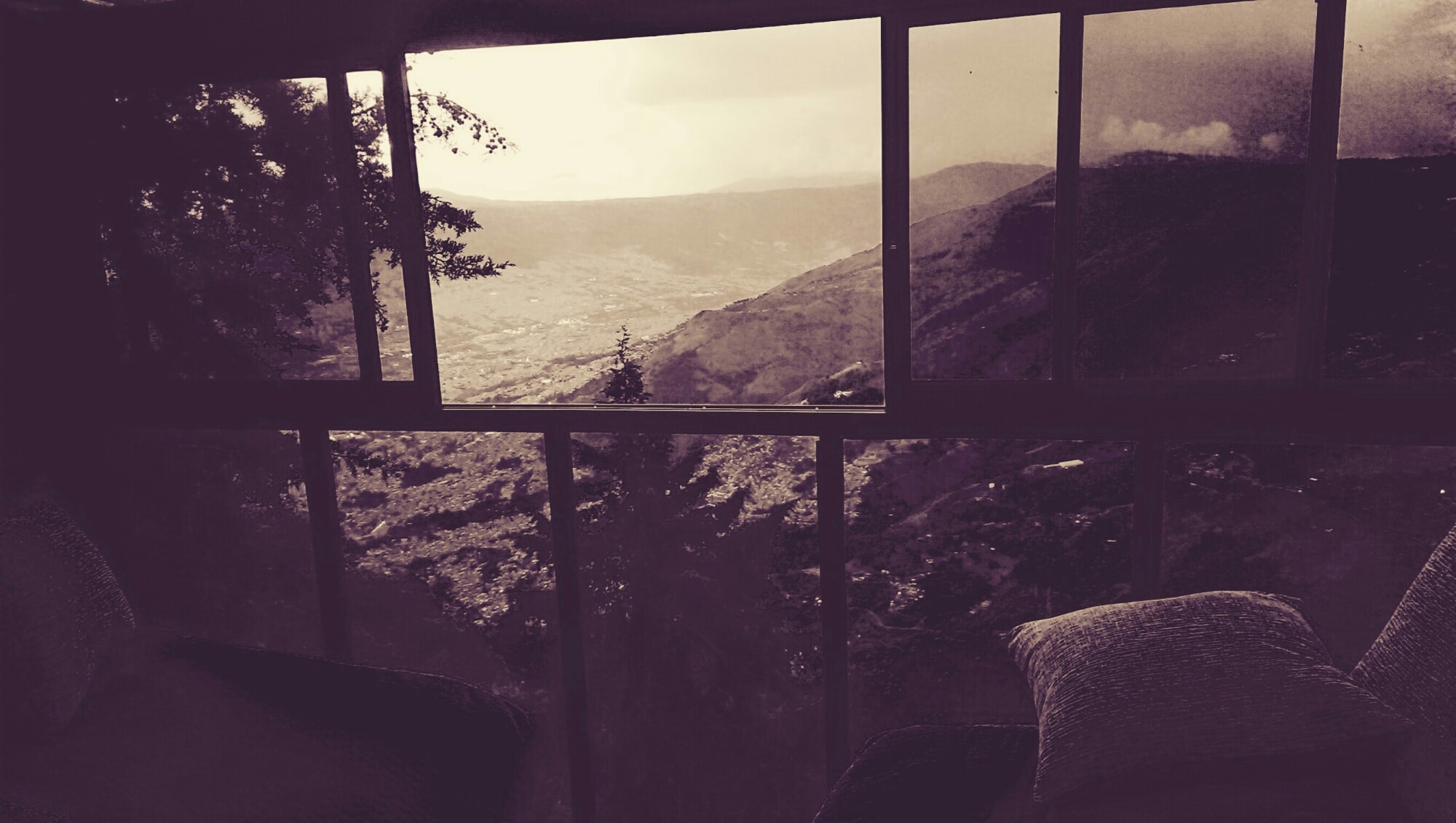 They tell us to scoot in just a little closer together, leaving room for about one comfortable position to sit in, and maybe one or two very odd looking ones. After all, about 50 people need to get into this Tipi and it’s important that everyone is able to see the fire equally well. I wanted to sit cross-legged but I guess that’s not happening. On my one side sits a 19 year old British guy anxiously ready to see the light, with on my other side an Australian offshore worker who made an art out of inserting gay sexual innuendo into every sentence. Next to him is my Belgian friend. There were strangely enough not one, but two Colombian doppelgangers of a couple of Belgian friends, which proved to entertain us greatly as time passed. I squint and the contact pops out of my right eye. Great. I’m about to leap towards spiritual enlightenment and I’ll be doing it cross-eyed.

I look around and see all these people, about half of them serious devotees, the other half, well, tourists, I guess. The ones who look like they’ve subscribed to this long ago, the ones who don’t look like they’ll be getting into investment banking anytime soon, they play the part well. The attire, the textbook meditative posture, the look of elevated bliss on their face. You’d think they’re doing it cause they think someone’s watching. My neighbor tells me he’s hoping the Peyote will help him quit alcohol and cocaine. My other neighbors are talking about buttfucking each other.

The abuelo finishes preparing the snacks and beverages, assisted by a lady who handles herself like a hardworking student just wanting to get all the answers on the oral exam right. I like the abuelo. That’s Spanish for grandpa, and he’s got all the qualities that would make a good one. When we were half-naked in the sweat-lodge prior to the ceremony we noticed big scars on his chest that show he’s been through several of certain shamanic rituals, which kind of make him a badass too. I’m sure he’d see it differently.

The plan was explained to us before by what you might call the middle-men of this experience. Three guys from the US and Australia, so devoted to the cause that they ended up organizing regular retreats to share the magic of these traditions. Basically, the abuelo would smoke four cigars. Four tobaccos, each signifying a certain important aspect of the world, and “activating” the Peyote further. After each cigar, a guy with a drum would go sit next to each and every person in the circle as they could sing their favorite Peyote-related songs to the beat. Next cigar, wash, rinse, repeat. As this happens, the Peyote would get passed around in several forms and you could consume at your leisure.

And that’s how it goes. Song after song, some about being fond of the Gran Espiritu now and then, some sounding like you would only expect them to sound from Disney Indians. It’s a nice experience, a great sense of togetherness. This really looks like a big happy family, like they all found where they belong.

But as the night progresses, my impression starts to turn. It could be the sleep deprivation, or the fact my brain constantly keeps trying to match up a blurry image of a fire with a sharp one, but something’s not right. Just like with the Ayahuasca a few days before, I get the sense I’ve been lied to. The accounts of people going through an internal revolution on these substances, seeing the light, never to be the same again. The ideas and friends that put me on a path here, the spark that gave me hope for putting a full stop to a series of questions. It starts to feel like the same lie that everyone is selling a version of. The kind they hope you’ll buy so they’ll be more satisfied with their own purchase. The kind that makes you feel like you’re close to the finish line, enough to keep you looking in the same area. I can’t ever seem to get my story straight. The frame to put the image of the world in so I can look at it in peace. The impenetrable fortress of thought where I could retire.

Then suddenly, something simple twinkles in the back of my mind. The problem isn’t the story at all. How complete it is, how convincing, how useful, how structurally sound. The problem is I’m a slave to it. The way I’m building a case to defend it in trial. Working my ass off day and night to hold it up for all to judge, because if the story goes, then I go. If the story breaks down, then I stop existing. It’s an addiction to meaning. Setting aside all other priorities in service of the ideas that occupy our minds like parasites. Though the world will turn whether I know why or not, and whether you are convinced of my explanation or not. The path to being at ease is not getting it right but letting it go.

One of the mediators asks us how we’re doing, sounding confidently hip in a way that’s out of style. We confess we’re feeling absolutely no effect. “Just wait”, he says with a grin, “It’s subtle”. “It’s solar activated”, says his colleague, “You just have to wait until the sun comes up.”

Yes… OK… I can see your… I mean, it *has* to work… It’s got mescaline and… I guess, you know, the sun can’t really penetrate my body and induce a chemical reaction with the seeds… Maybe if melatonin production needs to be, um, halted by sunlight, to… Or… Trying… to stay… open-minded….. *Click*

Ahhr fuck, here I go. Nope, not buying it. But hey, you’ve got your bullshit and I’ve got mine.

The sun slowly comes up and the last part of the ritual has arrived. All the women in the group get to say what they’re grateful for in life as they share the last cigar among them. A large meal is offered to the fire and then to all attendants. Our friends who again have started discussing their anuses are reminded by a devotee to watch out what they say near the fire. To little effect.

We all get up together, and start working our way outside into a nice new day, as we’re having conversations and munching on grapes. Everything looks so bright and shiny. I know it’s not the Peyote, I know it’s nothing spiritual. Colors look extra intense after 10 hours of being cooped up in the dark, but my explanation doesn’t make me feel any less fine.

I got what I came for.

2 thoughts on “Nothing But A Slave To A Story”